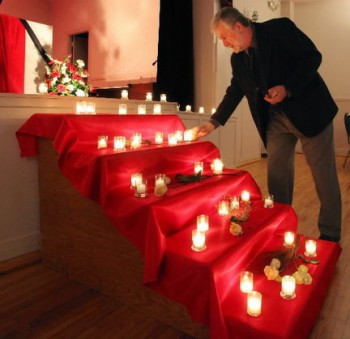 The death of the president of Poland and other top officials in a plane crash today set off a flurry of condolence calls and memorials in the Warszawa Historic District, a former Polish stronghold south of E. 55th Street and Broadway Avenue.

“It’s a tremendous shock,” said Eugene Bak, executive director of the cultural center and museum on E. 65th Street. “Tragedy like this has never happened in the 1,000 year Polish history. Nothing even close.”

The Center had planned a celebration Saturday night of the 200th birthday of composer Frederic Chopin, but quickly altered the program to be a memorial for all of those killed in the plane crash. Though much of the violin and piano music remained, the center changed the poems to be read in the program.

Organizers also added candles and flowers on the stage, along with a large black ribbon draped over panels of red and white cloth representing the Polish flag.

St. Stanislaus Church nearby had a Polish flag flying at half mast this afternoon, right below an American flag. Father Michael Surufka said the deaths will be recognized at services this week, particularly at the regular Polish-language mass at 10 a.m. Sunday.

By Patrick O’Donnell, The Plain Dealer