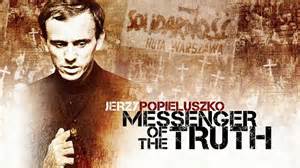 Father Jerzy was the chaplain of the Solidarity movement in Poland, who was later murdered by the Communists for speaking the truth in a country full of propaganda, oppression and social injustice.  “Totalitarian systems destroy man because they captivate his inside, his thoughts, free will and conscience.  The only efficient defense against these systems is the Truth,” he said.

It was Father Jerzy’s strong faith, conviction and courage that mobilized a nation to stand united against the Communist regime in Poland.  At his funeral, an estimated one million people surrounded his church in Warsaw and as one, they promised to continue his struggle for freedom through non-violence.  Present at the funeral, Solidarity leader Lech Walesa said, “Rest in peace, Father Jerzy.  Solidarity is alive because you gave your life for it.”

Jerzy Popieluszko: Messenger of the Truth was awarded first place in the documentary category at the 28th International Catholic Film Festival in Warsaw, Poland.  His Eminence Timothy Cardinal Dolan, Archbishop of New York, said “…This film is a must-see for all who believe in the rights of religious liberty, the dignity of the human person, and those who are lovers of freedom and defenders of the truth.”

Father Jerzy was beatified on June 6, 2010 in Warsaw and is expected to be canonized in the near future.